It was only after resorting to a hex editor to rescue my party from the end-game Main Control Sector that I remembered the existence of the "Help" button in the main menu. This transports you back to Fountain Head regardless of party condition, teleportation locks, and obstacles in exchange for-- I think-- one level from each party member. This penalty would be devastating in early game, but it was quite trivial in my end-game state. I clicked it despite having rescued myself with cheats, out of a concept of fairness.

To elaborate on exactly how I got stuck: the final section of the game is accessed with the keycard you get from one of the three alignment lords. Once you have it, stepping up to a specific door in the pyramids warps you in. This door is bash-proof and pick-proof. Once inside the final area, your Town Portal and Beacon spells are locked out. The only way to exit is to use of an Interdimensional Box that is found in the hallways leading up to the final room, but I got "lucky" in that I took the correct path to the finale blindly, so I never found it. So minus cheats or the help of Mr. Wizard's magic Help button, I was indeed softlocked. Anyway, I got out, and decided to flesh out the world map.

Starting from Fountain Head, I used Walk on Water and moved east to the northern islands. These turned out to be mostly unimportant. One of the islands revealed itself to be the werewolf island mentioned in a puzzle in Castle Dragontooth, but yielded nothing of value. Another island turned out to be home of Cursed Cold Cavern, which I saw hints of across Terra but never found. Referencing a walkthrough tells me this is where I would have found the Black Terror Key if I hadn't gotten it by recruiting the Robber hireling.

East from there was the big frozen land mass that contains Dragontooth. Here I'd abandoned exploring because an avalanche KOed most of my party with no warning. Turns out it was the only one; I was able to finish mapping this area with no further disasters. I found a few statues here that gave utterly massive temporary stat boosts for non-trivial gold costs, and entrance to Dragon Cavern: a dungeon I hadn't heard a single darn thing about in my travels. Peeking at a few resources reveals to me that it's the most side-content of side-contents, but contains four orbs and a metric butt-ton of cash. So I suppose my slight concerns about eventual money problems had a solution. I also found a pyramid to the Beta Engine Sector of the ship, which is also very side-content as you don't ever have to actually go there to finish the game.

South from there to swamp island: I'd just neglected to map about half of this huge land mass. Not for any particular reason; I just planned to do it later then got railroaded into the finale roll-up. Here I found the closest thing to "Red Messages" Terra has: talking skulls on sticks that give you hand-holding instructions to beating the game. I presume they don't talk to you until you do something, because it seems odd to just reveal this information without gating it somehow. I had wondered how JVC planned to replace messages and interleaves, and this is how. Either way, I found the solution in the natural course of game play so I guess M&M3 is well-designed. If I was stuck, eventual world-scouring would have revealed this.

Finally I drifted west to the sea around the fire island. Here I encountered a small army of Octobeasts and Crabs I had unleashed by looting the Obsidian equipment crates floating in the water. It's not a bad deal really: end-game equipment whenever you want in exchange for making this two region area inaccessible by sea. It's not like you access the fire island via Walk on Water anyway. Even my level 65 party members couldn't land solid blows on the crabs, but my Barbarian, at level 145 with 120 Might and boosted Accuracy from the stat statues one-shot them. Aside from that there's nothing to report: the fire island is completely closed off in impassable mountains; the only way in is by warping to the town inside.

So in total I'd missed three dungeons: Beta Engine, Dragon Cavern, and Cursed Cold. Only one of these was even possibly required, and I skipped it by getting the key from its depths elsewhere. Not bad for a blind play. I didn't really bother to explore these; I was eager to start M&M4 that same stream.

As traditional, here's my completed map. 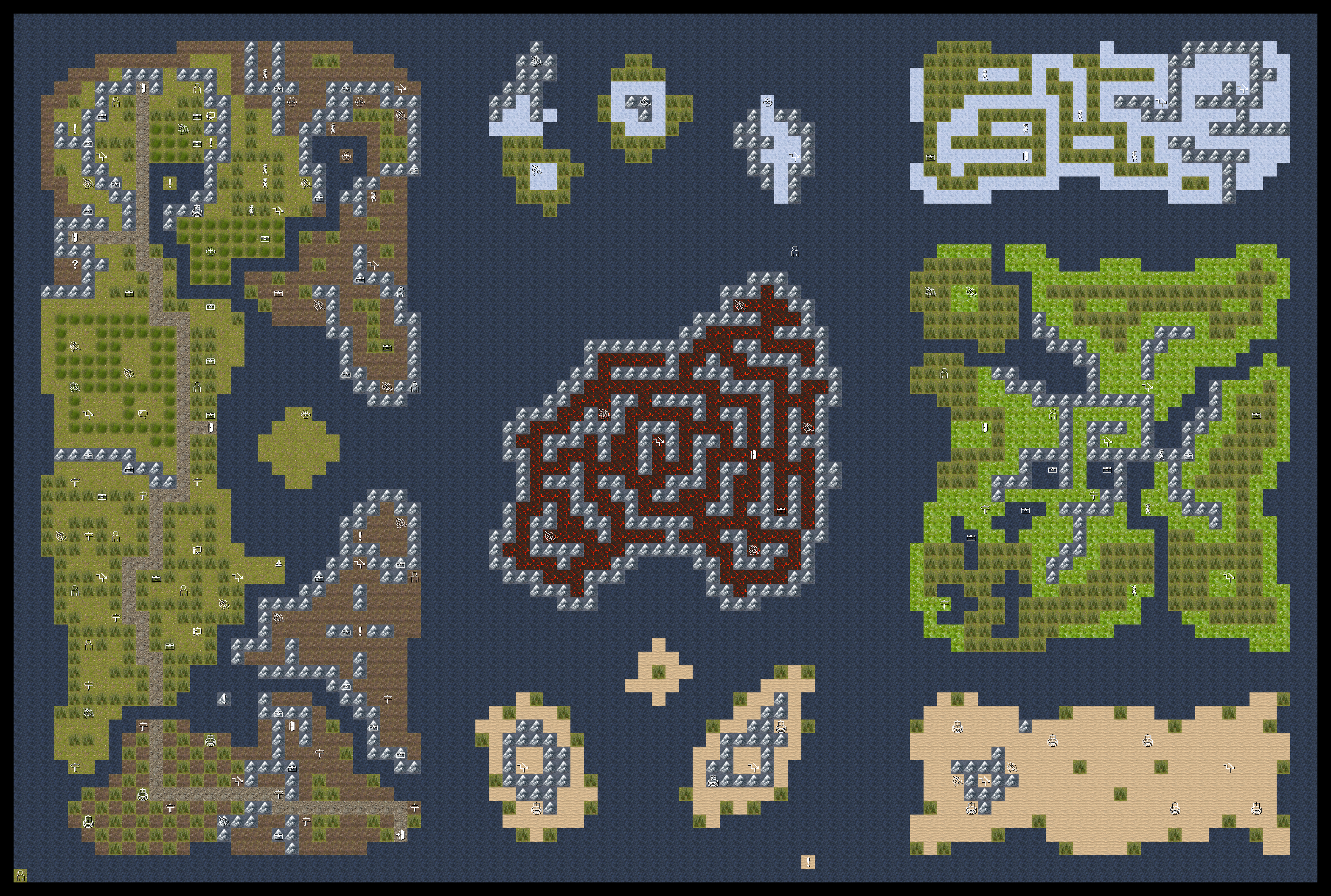