Okay, the title is a bit misleading, but Shining Force isn't the root of the Shining series tree. That honor goes to Shining in the Darkness. SitD's a game I really enjoyed, by the by. It was one of the first dungeon crawlers I played when I finally decided to give that genre a real shot (and look how that turned out), so it's only fitting Shining Force is the game I tried when I gave strategy RPGs a real shot. It didn't disappoint, either.

The Shining games all share a certain storybook aesthetic, down to introducing themselves with a child reading a story book and asking you to join them. It's a charming cartoony presentation that somewhat stands in contrast to most other entries in the genre given Fire Emblem's attachment to eugenics, Langrisser's focus on fiefdoms at war, Final Fantasy Tactics's story of betrayal, and Agarest's uh... whatever it is Agarest does. When playing a Shining game it feels like you're in a fairy tale, and typically the difficulty and cadence of the game follow suit to make you feel like a hero. 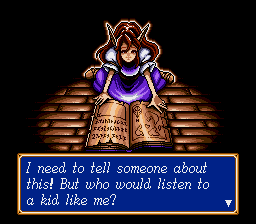 I think that's why they're so well suited to being the first foray into a genre. Darkness is an amazing first dungeon crawler, Soul is a great first action RPG, and as it sits Force is a great first strategy RPG.

If you've played any other older Shining game (or, as it turns out, Golden Sun), the control system will instantly be familiar with its cross menu and simplistic flat structure. At any given time you likely have at most four input options and yet no menu typically delves deeper than two layers. The pick-up-and-play capability of Shining Force especially lends itself well to deciding "I want to play a strategy RPG right now" and just going in. Without manual perusing, you miss out on knowing what items and gear do, but gear progression is flat and simple "more expensive is better" affair anyway. 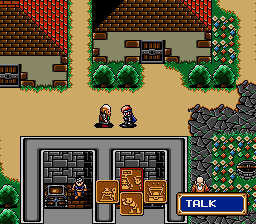 The story is pretty basic fairy tale knights and magic affair: you're a sword apprentice under a venerable older knight, minding your own business, when evil invades. The malicious empire of Runefaust has moved into your kingdom's territory and is trying to open the ancient seal on a vicious Dark Dragon. The king, unaware of what exactly Runefaust's plans are, sends you to investigate since sending a squad of apprentices on a recon mission is unlikely to draw attention. While out of the city, Runefaust attacks and kills everyone, leaving you the only ones aware of what's happening and in a position to stop it.

Shining Force proceeds in a back-and-forth between town scenes where you talk to NPCs, progress the story, buy stuff, and tend to your party and battles where you actually punch evil in the face area. There's no overworld to speak of, simply battlefields you've already cleared that you can now freely traverse. In most cases, leaving town via its one available exit will place you directly into the next battle. It's a good tight game loop that focuses on what players are here for: the strategy RPG gameplay. In fact, I've found most strategy RPGs tend to be extremely short on the town, chatter, learn segment of the game loop-- if it exists at all. I kind of like that. 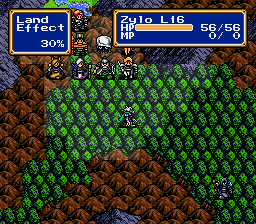 Further lending itself to simplicity and placing the player in control as fast and often as possible: Shining Force has no turns or phases. In many other strategy RPGs, you move all of your units then end your turn and the enemy moves all of theirs. Not so here. Every unit has a speed statistic and this determines who goes next. The cursor jumps to the next unit and you're immediately placed into move selection. This renders each movement from many inputs (select a unit, open menu, select move, move, select attack, select target, etc) to two: move and optionally select attack target. In exchange, an element of randomness is thrown into combat: you don't know who is coming up next or if a given unit will get to move before a threat can reach them. This can lend itself to frustration if you think a given unit will get a turn before they go down, and then they don't.

Actual attacks play out in an RPG-like over the shoulder cutscene where your unit swings their weapon or casts a spell and then damage is tabulated. In Shining Force, the target does not get to counter-attack. Matching with the storybook aesthetic, these scenes are often comical and overblown, especially with promoted units. Gort leaps into the air and does a full 720 before coming down with his axe, Zylo summons a windstorm, and such. One big down side here is Shining Force has a hit chance based on agility and some units can end up rather frequently missing. I feel like missing in a game like this is especially frustrating given it can ruin your strategy going forward and, in the unique case of Shining Force, you don't have 9 other units on your team this turn who can come in to clean up if it happens unexpectedly. 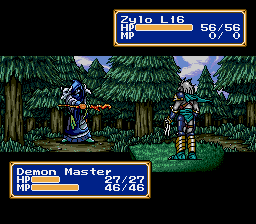 Spells are simple, direct, and fairly limited in scope. Each caster class can have up to four, but you'll spend most of the game using one. There's some hints at an elemental weakness system to give Blaze, Freeze, and Bolt some identity but for the most part it comes down to who has what available to them. Each of the main offensive casters specializes in one but may splash others. Spells can level up to four and you can choose what level you cast for different MP costs, ranges, damages, and AoE sizes. Largely spells form a way for weaker, squishier units to snipe kills and do multi-target hits. Frequently they're weaker than normal attacks and limited MP pools ensure they're used situationally.

Ranged attacks in Shining Force are fairly limited. You have spells and you have archers. Archers can hit two tiles away (three very late in the game), spells have a similar story for range but can AoE into a one tile radius cross and, later with the right caster, a two tile radius cross. That's it. No cross-map hits and very often no hitting foes across a barrier. This keeps the focus mostly on melee, which is fine in a system like this. 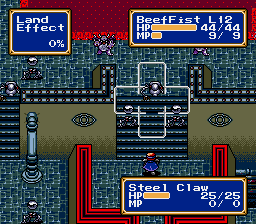 There is one vexing thing here in that even with AoE abilities you can only target enemies directly. If you have a triangle shape of enemies like above, you can't target the space between them and hit all three; you have to target one and just miss the opportunity to hit the other two. This is how the game works though, and the AI is constrained to this limitation as well so arranging your team into a checkerboard is a safe play unless someone is packing one of the two tile range bolt spells.

Shining Force boasts a cast of 30 characters, a few of which are missable or outright secret. Largely these 30 characters fit into about six archetypes based on their class, and within each class each character has fairly different stat biases. For example there are six centaur knights that all progress to the same promoted class, but the six all have different stat focuses and hit their massive growth zones at different times. Mae will come into her own around level 10 but Arthur will lag behind until 15 when he finally becomes a monster. This does result in difficulty in picking the right time to promote each character, but it's not too bad; anything will work with enough experience dumped into it. 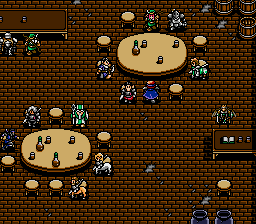 You can field 12 characters in any given battle and each character can be promoted at level 10 to an advanced class. Spell learning though is based on total level so if you promote a mage right at 10, you might never learn late-game spells. For the most part a character can be considered maxed out at 20, but they continue to level past this, just for 0 to 1 stat gains per level. At that point you may need five levels to equal the gains you get for leveling from 19 to 20, and that's not likely to happen often. As a result of the low level cap and basic design, numbers are kept pretty low. You can expect to go into the endgame with characters in the 30s to 40s of HP. Nothing but the final two bosses has more than 99.

Once you're rolling, not much changes in the core game mechanics. Enemies get more HP, more attack, some can cast spells, but there's nothing really brand new you have to tackle after the first couple of battles. That's part of the Shining aesthetic though: these games are designed to be simple, easy, and give you what's on the label with few surprises and gotchas. That's why they tend to lend so well to first timers and pick-up-and-play attitude. Shining Force definitely leans heavily into the "easy" part of this. 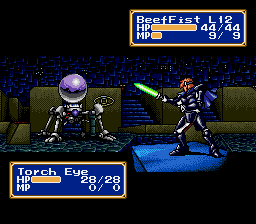 Outside of the smooth difficulty progression and lack of surprises, Shining Force is also fairly unique in this circle by providing a massively simple method of grinding. Your hero character comes with a spell that instantly ends the battle and returns you to your last town with all experience gained in tact. This spell is the only spell the hero ever gets, and MP recovery is automatic upon returning to town, so it's always available to you. No matter how bad things get, as long as your hero gets a turn, you can escape. Even if your hero is killed and a battle is lost, you return to town with all experience in tact; you simply lose some gold. Gold was never, ever a problem for me.

This easy access to experience grinding and this level of kindness in defeat is unseen in any other strategy RPG to my knowledge except possibly Disgaea. 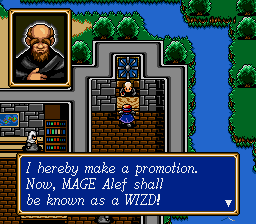 All in all, I keep using "Pick up and play" to describe the game and that's what it is. It's a strategy RPG I simply played from beginning to end. It was an enjoyable romp with a system that limits your strategic options with randomness and instead sets a fairly low barrier of strategic capability that can be offset by grinding if necessary. It's a perfect introduction to the concepts of the genre for someone who is more into standard JRPGs.

Of course when I moved to trying Langrisser I got my arse handed to me for hours before I found my footing, but I'm still glad I did it all in this order.