Sword of Hope is a cheeky and honestly somewhat ambitious little RPG for the Game Boy. This one's developed by Kemco, who also developed Shadowgate and a lot of the same stylistic, musical, and UI decisions can be seen here. Despite this, Sword of Hope is a hack and slash RPG in a similar vein of the original Dragon Quest, with a low level cap and an expectation of grind or a lot of lost wandering between major objectives.

At the surface, Sword of Hope presents itself like Shadowgate, with a first person perspective and interaction/navigation performed via a menu at the bottom half of the screen. Movement between individual rooms is performed with a compass that takes up about the bottom-left quarter of the screen, that displays arrows representing directions you can move. Interaction is limited to "Look", "Open", and "Hit". Unlike Shadowgate, once you select an action, you get a list of all available candidates in the room; no need for clicking every pixel of the screen to try to find interactables.

Outside of a sound and music aesthetic that is similar to Shadowgate, the similarities end there. Sword of Hope is a hack and slash dungeon crawler at the core, with little puzzle solving. The game loop in general involves healing up at the one safe spot in the game, heading out to explore the world, fighting in pseudo-random encounters for gold and experience, and going back to heal when you need. I say psuedo-random encounters because Sword of Hope introduced a very interesting, but ultimately frustrating, encounter mechanic.

When encounters spawn, they don't throw you immediately into combat. Instead they spawn in adjacent rooms. You can see this on the compass as rooms with encounters will display a circle next to their arrow. If you attempt to go in that direction you will be "blocked" by the enemy and the encounter will begin. In addition, enemies can spawn or move every time you take an action. This includes moving, looking at something, or even looking at your status screen. Enemies that wander into your room begin combat just the same as the other way around. These turns also include combat rounds: an enemy wandering into your room while you're already in a fight will join your battle.

It's a cool system that, in theory, could allow you to avoid undesired encounters. The problem is most of the game is linear paths of rooms so it does little to make an actual difference. What's more, after an encounter you will be in the room you started in and will have to attempt the exit again, and the encounter generator has no grace period. You can win a battle, exit combat, and find another enemy has spawned in the same exit, blocking you again. My record for consecutive encounters to take a single exit was eight.

The world itself is about 200 rooms ranging from forests to mountains to caves and finally a massive cellar and castle. The world hangs off a small hub forest from which you have access to four regions that are unlocked one by one. Each region gets larger and more labyrinthine than the last, with some dirty tricks coming into play later on if you're mapping the game as if it were a coherent cartesian plane. A couple of the tricks include silent teleports, one way doors, exits that take you to different places depending on the state of the room, and overpasses that are one room but limit which exits you can take based on where you enter. Mapping requires a large amount of flexibility in your map layout. Honestly it was a pretty sweet navigational challenge.

What few puzzles there are come in the form of looking at, opening, and hitting objects in rooms in the right order, or using the right item in the right room. Some of these are pretty obscure, such as having to know to hit a wall in a cave to make a rope fall down, climbing up the rope, and using a sapphire on a gravestone to get a new set of armor. Or, knowing to attempt to open a vine ladder to collect seeds from it that you need three hours later. I looked that one up in an FAQ, I'll admit.

The plot is pretty thin and simple, which is probably a good thing because the translation and text setting of the game is pretty awful. Sword of Hope is just completely stuffed full of grammatical errors, misspellings, and nonsensical text. None of it really makes the game impossible to navigate, at least. 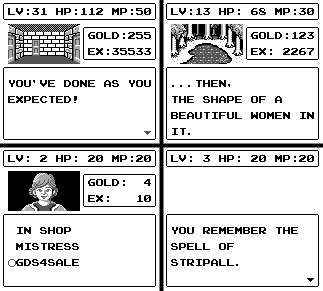 Combat is kind of flat and bland. You can end up in battle with up to three foes at once (and more can join from adjacent rooms if a slot is open), and it's your basic menu and turn based affair. Most of your battles will be settled with magic as your basic attack is all but useless past the first couple levels. There's a surprising variety of spells: three elemental attacks with four spells each, four additional ultimate attack spells, three heals, and a slew of buffs and debuffs. The spell list is varied beyond "higher tier does more" too, but in ways that are kind of counterintuitive and, again, frustrating.

This results in wanting to use low level wind spells, and high level lightning spells. Fire is just kind of there once you have other options. In addition, some enemies are immune or even reflect an element, or all magic. There's some good variety here, at least on paper. In reality it boils down to "Use Wind Lv2 until you have Lightning Lv4, then use that. If something is immune, use your best Fire"

Due to the simplicity of combat, the only real way the devs had to increase the difficulty was to crank up the numbers. This divides the game into two rather clean halves. In the first half, there's a smooth progression of difficulty through content, providing a bunch of new spells regularly, and new mechanics to explore. Then in the second half, level scaling of enemies bowls out of control, requiring a level or more per boss. You'll go from a comfortable victory in one area or boss fight, move to the next, and get utterly pasted until you go back and grind.

Around the three-quarters mark I went back and grinded until practically the level cap before trying to continue.

Grinding is tedious too, since there's maybe a pool of 20 foes across the whole game. Three or four unique enemies exist per area, so when you have to grind you're going to be seeing the same foes over and over again. On the plus side, every enemy design is unique and charming in a silly way. My favorite is the shadow, who just looks like a happy inflatable tube man.

There's no gear really, so level is your only measure of strength. You have a weapon and an armor slot, but these are upgraded linearly by plot progression, or shops gated by plot progression. This limits your choices to grinding or progressing, and what spells to use in combat. For a tiny Game Boy RPG that's not unexpected, but for how much grinding you have to do, it gets old.

As for the plot itself, it's mostly covered at the start: You're a prince who was hidden away when your kingdom fell to ruin and now you have to find the Sword of Hope in order to restore it. Pretty trite, but maybe not so much so in 1989. The plot however does raise the hilarious element of the player character realizing the Sword of Hope is stronger in their left hand, due to their left arm having the royal birthmark on it.

After this little scene during the final boss, all subsequent physical attacks crit. This led me the canonize in my own head that the entire quest, the hero didn't know he was left-handed.

So really what's here? Not plot, not interesting combat, not character growth. Mostly it's an interesting navigational and mapping challenge (and you will need to make a map). Not much of a recommend unless you enjoy video game cartography or want an RPG and have nothing but a Game Boy. Though even then, there's the Final Fantasy Legend/SaGa series.